You are here: Home / In The News / After the Hate, the Good Stuff: Counter-Demonstrations of Love 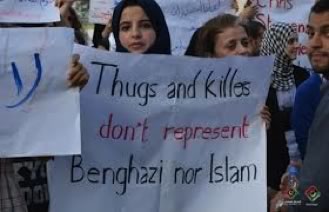 We get so bombarded by bad news all the time. Recently, films and stories out of the Middle East assaulted our senses and minds with images and narratives of outraged mobs and murder. These are serious toxins that are best dealt with through a disciplined spiritual practice. In order to transform hatred and violence into love and compassion, we need to meditate regularly and purposefully. Many practitioners like to dedicate each meditation period to a bodhisattva, a saint, or a goddess. Whether we conceive of these as actual persons or spiritual ideals is unimportant. What matters is orienting our being in the direction of compassion, forgiveness and love.

It is also important to nourish ourselves on positive images and narratives; voices that are often drowned out by the louder, more strident voices of hate. The wonderful counter-demonstrations that followed the embassy killings and mob attacks were under-reported–and very important. Countless individuals had the moral courage to stand up in the midst of the chaos of mob rule and clearly articulate their opposition to violence. When foolish expressions surface on the Internet, we must never be cowed by violent reactions of angry mobs to forsake our core values of freedom of speech and expression.

In an era of Internet neutrality and global instant communication, every one of us is going to encounter crude and horrible defamations of the things we hold sacred—no matter what they may be. Yogis, yoginis, and practitioners of holistic spirituality will encounter ideological critique—some of it crude and mean-spirited—along with every other segment of the population. The right response is to “keep calm and carry on.” We know that our yoga/meditation practice holds real value for us, just as surely as religious exercises help adherents of Judaism, Christianity and Islam. And of course there is plenty of overlap; many members of the “big three” monotheistic faiths—and other faiths—are also devotees of yoga and meditation.

The huge task before us is to get beyond the ideological, religious, and political dogmas that divide us as human beings. When we seek and find our commonalities—the traits and values common to all of the human species—we will begin to evolve past the kinds of ugly displays that so plague us now. Let’s not forget to focus on the beautiful expressions of love that both follow and precede any demonstration of hatred. If the former fills our consciousness, we will be much better able to deal with the latter.