You are here: Home / Basics / Can Willing It Make It So? 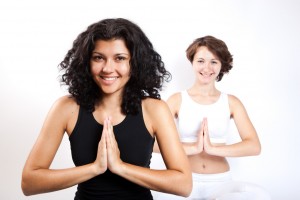 We’ve all heard about the benefits of positive thinking. Some argue that without it, nothing is possible. Some say that no matter what, fate will take its course and there is nothing we can do to stop it. Others believe that if they want it, they will find a way to make it happen and that neither fate nor positive thinking will get you there; just plain ol’ teeth gritting and hard work. I usually fall into this camp, which I’m told isn’t very yogi-esque of me. So, I set out to do a little research to see if I could be proven wrong.

The mind is a crazy, complex and crazy thing that even some of the most advanced medical technologies can’t explain. The brain gives us the right to choose, make decisions, laugh, dance. But oddly enough, it can also come to be our worst enemy whenever bad news is received. Last year, when I was diagnosed with Grave’s Disease, I maintained what I like to think as a pretty kick-butt attitude towards the whole thing. Yes, I would feel rotten for the next year or so until my medication balanced and the radiation performed its magic trick on my thyroid. Yes, I would be on medication for life and never be able to do without a doctor for long. Yes, I WILL catch every cold and flu within a 100 Km range. But I’m so blessed that I get to LIVE and WRITE and LAUGH!

Don’t get me wrong, I had my days of feeling sorry for myself. Those days were the ones where I could hardly manage to drag myself off the couch to cook dinner and so I ordered in, again, only to look around three days later and realize I was surrounded by empty food cartons and I had only left the couch to use the washroom and occasionally pass a toothbrush over my increasingly less than pearly whites. Smiling was usually too much effort but inside, I knew that this disease would not get the better of me. That’s just the kind of person that I am. But did my positive attitude help make me feel better? I would argue that it didn’t really. I coped with the hand I had been dealt, recognized that it could be so much worse and managed my disease in a very practical manner that you might expect from a former soldier. To me, fate had no hand in my ability to deal with my illness. It was my character that brought me to where I am today; not healed (since Graves is a permanent disease), but well on my way to living a relatively healthy life.

On the flip side, it’s hard to argue with articles that flood the news and Internet, with people claiming to have healed themselves from positive thinking, including Louise Hay, who details in her book about her ability to recuperate from cancer, all by thinking positively and meditating. With conviction like that, who are we to argue?

I also found this amazing article about Deepak Chopra on Psychology Today, which basically argues both sides. There is both studies that suggest patients feel better when they think positively as well as those who show serious decline no matter their attitudes. Perhaps it is a matter of fate, but that’s a whole other mind-bend that I can hardly wrap my head around.

Like most things related to the brain, we do not have the ability to live in someone else’s body and what it is that keeps all of us going. We cannot know what forces alter, affect and change our lives because we are either not aware of them or we do not acknowledge them. We watch the news and see stories of horror, anger and murder but we also see miracles of faith, love and joy. As to whether or not these things are due to fate, positive thinking or just drive and determination, we’ll likely never know. Maybe it’s a mix of all three.