You are here: Home / Yoga Stuff Happens / To Chant or not to Chant? That is the Question… 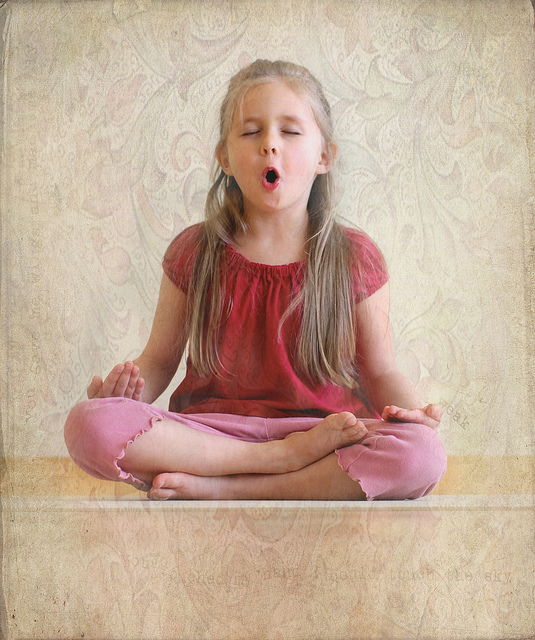 What do you do when half of your yoga class wants to end the class with an “Om” and the other half would rather eat glass, instead?

Truly, I don’t think anyone completely hates chanting, but then again, I have a student who doesn’t celebrate Easter because her church considers it to be a “Pagan holiday,” so the “Om” is most likely going to be offend her.

I have another student who told me that the “Om” at the end of class soothes her and brings her much needed peace after just losing a family member to cancer.

How do we, as teachers, or students of yoga, incorporate “Om” or other chanting into our practice? Is it too personal to offer as a group exercise? Is there too much associated with it that is should not be offered at all? Or does its unifying intention add worth and value to our yoga classes?

I usually feel out the group. If there are enough “go with the flow” folks in the class and a few “I’m not sure about this” people, I may give “Om” a shot. I always explain it first and keep it light and understandable by saying,” Feel the vibration in your head, lips and face. It sounds like the buzzing of a bee. It finalizes our practice. It makes us end as a group together. It’s good for your sinuses.” I know this has a superficial tone to it, but sometimes it gets the Non-Omers to Om.

Word of advice: If you have any question about offending someone religiously, do not offer any chanting. I am an open-minded Christian (with a B.A. in Religious Studies) so I don’t feel that doing “Om” is going to turn me into a New Age watered-down Christian believer. However, you need to ask your yoga students how they feel about chanting.  If you don’t, you may take the risk of them not returning to your class.

Also, during Kids’ yoga classes, I call “Om” the “Bee Buzzing Exercise.” I’ve never had any trouble with angry parents when I keep it general and offer “Om” in this way.

I don’t want to disregard the effects, spirituality and benefits of “Om” but I think it is worth questioning and it is helpful to compare ideas with other teachers and yoga students.

So what are your thoughts? To Om or not to Om? That is the question…