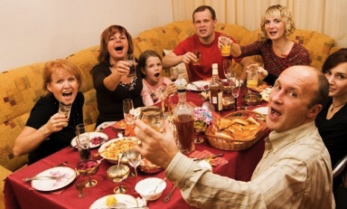 A humanist and a priest sit down for a holiday meal. No, this is not the setup for a joke, as much as it may sound like one! It actually describes what happened at our recent Thanksgiving celebration. These ceremonial feasts can be tricky; sometimes they’re the only time certain family members and friends of widely differing stripes sit down to share a meal together.  There are bound to be a variety of political, religious, and ideological views represented. For humanists, there is the added wrinkle of their lack of supernatural beliefs, which can be a sticking point for some still in traditional religion.

Just before the Thanksgiving holiday, I saw an amusing Facebook post that read, “’Tis the season to have your life choices questioned at the dinner table.” I hope it’s not as bad as that for you! (it sure isn’t for me). But for those who have left religion behind, the potential for friction with those who remain in the fold can be a real and sometimes thorny problem.

I consider myself incredibly fortunate in this regard. My mother and sister are still nominally Catholic; while their observance is more cultural than religious, I’m the only member of the family who “officially” left the church. At the Thanksgiving family meal that just past, my wife and I had the wonderful opportunity to drive the priest who married us to my sister’s house to celebrate. Even at the time of our engagement, I had ceased being a practicing Catholic, and this wonderfully witty and friendly man had no problem with that. He was our family priest when my sister and I were growing up, and he’s the real deal. (I think it says a lot about the tolerance of this time in our culture that a priest can be good friends with someone who in times past might have been called an “apostate.”)

When we get together, we don’t discuss theology or the Vatican (that would be a non-starter); we talk about life. My critiques of the Catholic Church are voluble and deeply felt, but I respect the man too much to get into these with him. He’s such a thoroughly decent man that I can’t help believing he would agree with most of my judgments of the moral failings of the institution to which he is tethered by a lifetime commitment. He’s a deeply humane individual who has never spoke a misogynist word in his life and who would no sooner molest a child than I would fly an aircraft into a building.

Is my family priest, thoroughly decent individual that he is, responsible to answer for the Vatican’s culpability in things like the subjugation of women, child abuse, and denial of birth control to the developing world? Of course not! No more than I, as an American citizen, can be held personally responsible for wars of opportunity my country prosecutes in defiance of international law. I would be quite surprised if I were to learn if this gentleman hasn’t registered his personal protest of the way the Vatican covered up its rampant child abuse scandal, for instance, just as I resisted (as best I could) my country’s devastation of Iraq. We’re all limited in our influence over world events.

Anyway, the good Father said the grace at the meal, and it was as genial and inclusive a prayer as one is likely to hear. At these moments, I always join hands with my family but stop short of bowing my head. I don’t want to be hypocritical, but neither do I wish to offend anyone. Of course, if the believers have their eyes closed, they can’t be offended by it!

There is great wisdom in the age-old prescription for avoiding politics and religion at mixed-company gatherings. These topics cause people to ‘think with the blood” as no others do; avoiding them and simply enjoying each others’ company is nothing to be ashamed of. In fact, I would be ashamed of myself if I did start a war by lobbing a politics-or-religion grenade into a family gathering. I don’t wear my philosophy on my sleeve, but if someone asks, I put it in thoroughly positive terms: “I’m a humanist; I believe in the Enlightenment values of democracy, personal autonomy, human rights and the separation of church and state.” It would be puerile and downright rude to wade in with something like “I believe organized religion is largely responsible for the subjugation of women, the abuse of children, and needless human suffering.” These are sentiments more suited to a rigorous one-on-one debate than a holiday gathering. Civility rules!