You are here: Home / Philosophy / Creative, Sane and Humane 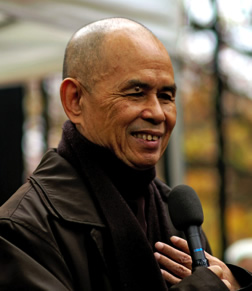 My favorite spiritual teacher happens to be the Buddhist monk,Thich Nhat Hahn. He has a radical take on the many troubling references to hell from the Jesus figure in the Christian Gospels. On this problem, Thomas Paine famously wrote,

“I believe…that any system of religion that has anything in it that shocks the mind of a child, cannot be a true system.”

Most children are indeed shocked when the hear that some people, perhaps including people they love (or even themselves) may be in danger of being tortured forever. I find the idea obscene, perhaps the worst misuse of human imagination in history, and it strikes me as self-evident emotional abuse. The only way to counter a vile and toxic idea is to introduce a healthy and positive one to take its place, so here goes!

Nhat Hahn suggests that, when Jesus said that “Whoever is angry with his brother shall be in danger of hell fire,” he didn’t mean that the angry person risked going to a place called hell; instead, he was in the grip of strong emotions that were able to create a hellish aspect in that moment. The sensation of rising heat one feels in such a state, he suggests, could have been the reason why themes of fire and burning became associated with the concept of hell.

You can summon mindfulness of breathing (Nhat Hahn compares mindfulness to the Christian concept of the Holy Spirit) to transform such hell-on-earth moments. Becoming deeply aware of what’s going on around you and inside you enables you to create positive mental formations that are conducive to joyous living.

I don’t know how well this interpretation of a Gospel passage would fit with New Testament higher literary criticism. If the highly mythologized Jesus figure in the Gospels is based on a real itinerant preacher (I lean toward this view), we can be fairly certain that that person was obsessed with apocalypse, the end of days, and a final battle between the “Sons of Light” and the “Sons of Darkness.” This happens to track fairly precisely with the world view of Qumran’s resident ascetic cult, the Essenes, leading to speculation that the real-life individual who inspired the Christ figure may have emerged from within the Essene community.

In any case, I find Thich Nhat Hahn’s interpretation creative, sane and humane. By contrast, there are still some who continue contaminating children’s imaginations with lurid threats of eternal suffering; this is an immoral thing to do. The emotional damage done by this pernicious doctrine can linger throughout a child’s life. Even if they come to the conclusion as adults that most if not all the dogma they were taught as children is nonsense, “ghosts” of this obscene idea may persist in their subconscious minds.

I’m delighted to see and hear more and more contemporary Christians who are tired of being misrepresented, and who recognize this idea as an irredeemably dark remnant of Medieval thought. And this humanist strongly agrees, it is best consigned to the trash bin of history!