You are here: Home / In The News / De Profundis 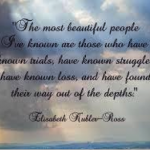 Yesterday I saw one of those horrifying videos of an American cop savagely beating up a woman, and another casually spraying Mace into the eyes of a terrified little girl. My inner rage-beast was instantly hooked; I inwardly snarled, “Of COURSE it’s a white cop beating up on black women and children.”

Then I caught myself. The fascist impulse, of course, has nothing to do with race, nationality or religion. 20th century fascism was not exclusively German, Italian or Japanese (although it was in those countries that it took hold most firmly). The impulse is part of the shadow side of humanity, the side that’s comfortable with the concept of Homo homini lupus (“Man is wolf to man”). It’s every bit as universal as the altruistic impulse and the instinct to protect the innocent.

A friend of mine quite rightly pointed out that humanity’s ferocious side — the part governed by the brain stem or “the reptilian brain” — has been vital to the species’ survival. Of course that’s true; our Neolithic forebears had to fight off predators, turn back aggressive tribes and kill game to survive. In-group and out-group tribal dynamics were a vital necessity in that period of our evolution. But we have evolved further since then; of that I’m certain. The Greco-Roman philosophical tradition, the Ahimsa concept and the “Golden Rule” are all relative newcomers to our species. They have made the world a better place. And as thoroughly counterintuitive as it is, it happens to be true that worldwide violence has been steadily declining since the Middle Ages. (For a scientific explication of this phenomenon, I highly recommend Steven Pinker’s excellent book The Better Angels of Our Nature.)

That being said, guns, militarized police forces and an uptick in neofascist thinking are devastating my country right now. The murder of yet another unarmed teenager by the police (with no arrest made or, apparently, forthcoming) is beyond heartrending. Media campaigns to smear such children after the fact have become a standard PR tactic to erode public support for victims of gun violence. It’s happening as I write these words; you can set your watch by it. We have one huge “news” network that spews disinformation and a rigid, authoritarian worldview around the clock, feeding widespread rage and paranoia. There’s an entire industry–right-wing talk radio–that makes money by fomenting racial hatred, xenophobia and misogyny.

What is happening in this country?

I have no answers, only increasingly anguished questions. I know there are many intelligent, deeply compassionate and humanistic individuals here; I interact with them daily. But their work and mine don’t seem up to the task of turning back the steadily rising tide of ignorance, hatred and violence in our midst. Time for an unusually long “unplugged” period devoted to yoga, meditation and going “back to the earth.”