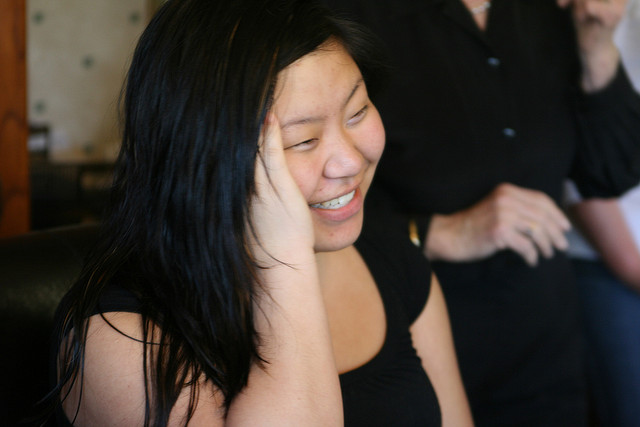 Teacher Question of the Week:

What’s the most embarrassing thing that’s ever happened to you in your yoga practice or while teaching yoga?

One of my crazy experiences happened last winter. I had the ultimate pair of black, fleece sweat pants that fit perfectly over my yoga pants. On cold days, I would wear these two pairs of pants as double, warm layers. It worked like a dream. (I have since lost those fleece pants and have never found any that compare!)

I was running a bit late (probably due to the snow) to teach a yoga class. I went to the front of the studio which was completely full of yoga students. I began chatting as I prepared to ready myself for teaching. I removed my coat, hat and gloves, etc. Then I slipped my hands on the inside of my fleece pants to pull them off over my yoga pants. Suddenly, I looked up and noticed everyone had a funny look on their face. Imagine my horror when I realized that I had forgotten to put on my yoga pants underneath the fleece pants which I was removing in front of their very eyes (and much to their amusement!)

Fortunately, I had on underwear under the fleece pants due to wearing them as regular pants while at home that day. But why did it have to be white underwear contrasting with the black pants? Not one of my finer moments in yoga history. It was like that scene in the movie Bridget Jones’s Diary when Hugh Grant is trying to get intimate with her and she realizes she has worn her high top undies that evening. He asks her if she always wears her “Big Girl panties” when she goes out on dates. Yeah…you get the picture.

So what’s your story? Yoga and humor do go together! Share a tale or two! (Just not your “tail,” as I did!)