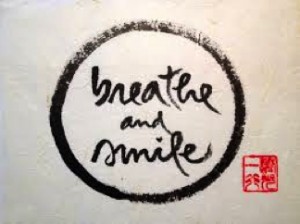 (And a few thoughts of my own!)

Breathing in, I see myself as a blooming flower.
Breathing out, I feel fresh and alive.

Breathing in, I see myself as a great mountain.
Breathing out, I feel solid and strong.

Breathing in, I see myself as a pool of still water.
Breathing out, I feel lucid and clear.

Breathing in, I see myself as infinite space.
Breathing out, I feel boundless and free.

Breathing in, I calm myself;
Breathing out, I smile.
Solid, free and lucid,
In The Ultimate I dwell.

What does it mean to dwell in The Ultimate? The way I interpret it is as follows.

Is there enough corroborating evidence from extrabiblical sources to prove that Jesus was an historical figure? Perhaps not, but it doesn’t matter. Someone came up with The Sermon on the Mount, which represents a quantum leap in first century Jewish spirituality; this is what’s important. Evidence of the Buddha’s historicity is easier to come by, as he started out as a royal personage in India about whom careful written records were kept. His dharma lives on in every practicing Buddhist, and in those of us who recognize a highly practical wisdom
therein.

My chief spiritual ancestor is Socrates, about whom there is slightly better proof of historicity than Jesus, but perhaps less than the Buddha. Again, it doesn’t matter if a historical figure called Socrates lived in Classical Greece or not. Someone invented the Socratic Method of imparting philosophical wisdom; that’s the important thing.

And finally, directly from my Sensei:

I’ve arrived and I am home,
In the here, in the now.
I am solid, I am free;
In The Ultimate I dwell.