You are here: Home / Yoga Tips / Holiday Gifts for That Special Yogi- Part 1 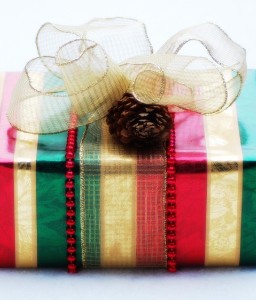 Ah, ’tis the season yet again for gift giving. But it is a time of year that can also be extremely stressful, since giving that perfect present can be a little nerve-wracking. But thankfully, there are gifts abound for that special yogi in your life and I’ve rounded up my favourites in a two-part post.

For those who practice Bikram or any other physically demanding yoga style, a yoga towel can be vital to getting that pose just right. Nothing makes for a more treacherous pose that slipping on drips of sweat and so a highly absorbent towel provides the perfect layer between you and your mat, especially those with grips on the bottom. Specially designed to be the size of your mat, you won’t regret one of these purchases. I like Gaiam’s Thirsty Towel best.

I’ll admit, when I used to see people with these, I thought they were a little silly. But again, any of us who have done a more rigorous class knows that sweat can get in the way of even the most practiced yogi’s pose. In fact, I nearly broke my elbow when some stupidly applied hand cream (right before class…what was I thinking?) had my downward dog palms slip across the floor. So some gloves and socks with grip, like these from Stick-e Brand, could make all the difference between holding a pose and making a rather unfortunate face plant.

It’s the time of year where everyone is travelling to family and often, this can get in the way of our practice. Oddly, this is a time we tend to need yoga more than ever, simply because as much as we love our families, they often bring a lot of…ahem…stress. That’s why 108 Yoga Stick Figures, dreamed up by Yogaflavoredlife’s very own Charlotte Bradley, are such an excellent purchase; they serve as a portable pose prompt and a gentle reminder that making time for your yoga practice will make for a happier holiday season.