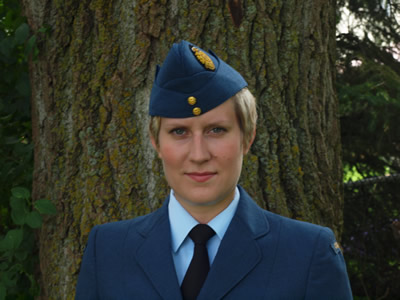 This week, I had the infinite pleasure of meeting Nicole Taylor, who is trained as a Yoga Warrior instructor, a yoga practice that is designed specifically to assist soldiers in coping with Post Traumatic Stress Disorder as well as the daily and specific stresses that military members are exposed to. The classes are also open to those who are first responders, such as paramedics and firefighters, who also witness emotionally difficult experiences. Each class is designed to relieve many of the common symptoms of PTSD, including jumpiness, feelings of agitation and anxiety. The concept of Yoga Warriors is especially close to my heart since I was a forth-generation soldier, having served almost a decade after my dad served for thirty-five years before me. This is a photo of me, just a year ago, proudly donning my air force uniform.

Nicole Taylor is the only Canadian to be a trained Yoga Warrior instructor, as Yoga Warriors started in the United States. If you would like to read more about Nicole, please click here, to read a local news article from the Barrie Examiner Newspaper. If I could paint a picture for readers as to the perfect person to lead this kind of practice, Nicole would be the model upon which I would base my drawing. When I walked into the studio (located in Barrie, ON, at Ann Green Bliss Yoga Studio), she was warm and inviting, non-judgemental and informative, kind and compassionate. She was quick to answer all of my questions and was more than willing to share about this innovative method, even when answering the questions from my dad, the ultimate skeptic. As a yoga virgin, he was a little more than nervous to be “getting all touchy-feely,” which is how he (and many other soldiers) describes anything that relates to any sort of emotional experience. But donned in our yoga gear and entering the studio with open minds, we settled into our mats and prepared ourselves for the Yoga Warrior experience.

The class was very much a Hatha style, with great meditation both before and after the session with a small group of just six people. There was specific focus on mindfulness, allowing ourselves to remain in the present and be aware of our surroundings. The largest difference between other Hatha classes I’ve taken was in the approach and words that were used. It has been my experience that sometimes, the terminology used in classes can be off-putting to those trained to be “tough” and business-minded. To say the very least, we aren’t really a crowd accustomed to “getting in touch with ourselves” or picturing grassy meadows and saying words like Namaste. Nicole used words that were accessible and realistic, which is key to reaching those who aren’t familiar with this type of practice.

Working a yoga class around groups of soldiers can be no easy task. Serving in the Forces is a job that demands a certain kind of detachment from oneself, when working conditions and traumatic experiences get the better of us. Especially for those soldiers who have deployed and been put in harms way, the response, upon returning home, can often be to detach from both yourself and the people who love you as a means of coping. We soldiers are trained to respond logically and use our training in each and every situation we encounter, which usually doesn’t leave much room for emotional response. We are taught to “soldier on,” which means we are to continue on no matter the pain, be it physical or mental. Sometimes, this mentality is necessary to survive and sometimes, it only teaches us to retreat into ourselves, never to come out again. This is where Yoga Warriors comes in, and in my opinion, this innovative practice is about the spread like wildfire across Canada and hopefully, across the world. Nicole also teaches classes on several military bases, with many commanders getting on board, acknowledging that their troops need methods to cope with the stress of their work and experiences.

My dad still isn’t sure how he feels about yoga, but we’re headed back to Yoga Warriors this coming Wednesday. For the lovely Nicole Taylor, full of positivity and energy and dedication to her work with our soldiers and veterans, I am in awe of the work you do and the passion you bring to the studio. Thank you for sharing your gift and expanding the minds of our soldiers and their leaders.

In the meantime, you’ve created a new Yoga Warrior who both salutes and stretches, all in one day.