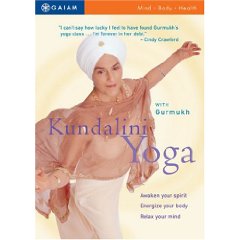 It’s a pleasure to meet you!

I admit it took a little bit of nerve on my part to review a product that has been around for the last five years, but this DVD is still in stock at all the major retail suppliers (I checked!) and remains a unique gem in my own Yoga collection.  Before we begin, and seeing that I’ve been introduced after a fashion, I have a little Christmas story to tell:

It was roughly six years ago that I began adding Yoga into my daily and weekly routines of Qi Gong and Tai Chi, via a DVD most of you will recognize: Yoga Journal’s Yoga for Beginners: Patricia Walden (DVD 2002)

, a great choice for absolute beginners still, in my book.  This was the ONLY source of Yoga practice I had at the time, until Christmas morning of 2005 when I opened a thoughtful present from a friend and found Kundalini Yoga With Gurmukh

First Thoughts…and a lesson in Yoga

I remember my thoughts word for word, as although I was unaware of it at the time, Gurmukh was going to put me to shame by the next morning…  Patricia Walden wearing a bodysuit and very fit for the last year and a half, now Kundalini Yoga with Gur-who?  I heard she was sixty years old (she was fifty-eight at the time) and dressed in a white nightgown for the DVD!  Was this some kind of Yoga for seniors?  Hardly an exciting gift, I thought, but my friend’s heart was in the right place – on to the next gift!

Six-thirty in the morning on Boxing Day, still heavily laden with turkey and stuffing, I tore the plastic off of Kundalini Yoga With Gurmukh

and decided to give the one hour DVD a chance.  I lasted exactly twenty minutes before I had to turn it off, I was physically exhausted….and no, it wasn’t a white nightgown she was wearing either.

Different can be a good thing

For those avid Yoga readers who have not experienced energetic Kundalini Yoga styles, be warned – this DVD is not for the faint of heart.  Gurmukh seems ageless, floating through the physically demanding sections while inspiring you and instructing in a voice that only adds to the background music while you sweat like you’ve never sweat before.  There are reviews out that that feel this DVD is dangerous, and I agree after a fashion.  A central concept in Yoga is to listen to your body…failing to do so with this DVD will leave you lying on the floor quivering, pulled muscles and all.

To be fair, Gurmukh often cautions against over-exerting ourselves, and offers a piece of sage advice I have heard nearly every morning since that first attempt, “It is not what you get out of your Yoga; it is what you put into it that counts.”  That being said, watching this fifty eight year old dance through this one hour DVD as if she was twenty is inspiring enough in itself to follow her advice and push past any mental resistance to stop.

introduces Yoga practitioners both new and experienced to this very different but rewarding Yoga practice designed to awaken Kundalini and reunite you consciously with the powerful spiritual energy within you.  The DVD has one drawback, as there are no chapters, but this is understandable in light of Kundalini progression philosophy.  For over-all fitness, you will be guided through two stages of awakening and strengthening exercises focused on key core muscles.  This is followed up by the third section, meditation, which ends with Gurmukh leading you in a marvelous Shavasana.  The program is challenging to say the least, but I have yet to find any Yoga DVD that has such a profound and immediate effect on my energy, nervous system and state of relaxation.  Buy it, you will not regret it!

probably deserves a 5/5 rating, but due to the lack of DVD navigation and the heavy reliance on the user to guide themselves in determining what they can handle physically, I give it my review rating of

To most students of Yoga, Kundalini is a familiar word – It is the powerful spiritual energy visualized in the shape of a coiled snake, residing in Muladhara Chakra which is the first of the Chakras.  In men, Muladhara is located at the perineum, midway between the genital organ, and the anus.  In women, it is located at the posterior side of the cervix, midway between the vagina, and the uterus. Here there is a point which in Sanskrit is known as Brahma granthi, the knot of Brahma. As long as this knot remains intact, the energy located in this area is blocked. The moment the knot is undone, prana shakti awakens and infinite energy and spiritual experience emanate from Muladhara.