You are here: Home / In The News / My Return to Yoga Warriors 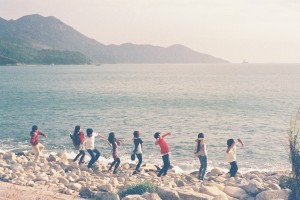 I’ve arrived in Ontario for the Professional Writers Association of Canada conference next week, and so I thought I’d make a bit of a trip out of it and stop in Barrie to visit my family. Of course, no trip to Ontario would be complete without a trip to the Bliss Studio for a Yoga Warrior class with my (now) good friend Nicole, the practice I’ve mentioned that is designed to help soldiers and first responders cope with the stress of their jobs and Post Traumatic Stress Syndrome or Occupational Stress Injuries. Even though we’ve only met once, the yoga cosmos have seen fit to reunite Nicole and I over and over, through poses and emails.

Much like last time, my dad and I laboured up the steep studio stairs, arriving into a warm welcome from Nicole Taylor, the Yoga Warrior instructor. Over the last six months of his own practice, I’ve watched my dad lend all of his military knowledge to Nicole, in order to help her build her business and the benefit it two-fold: she learns all the secrets of business planning and about those that she works so hard to help and my dad gets to revisit the military part of himself that is still ever so present. During this session of Yoga Warriors, I saw plenty of new faces gathered in the room, most of them younger and many of them travelling from Borden, where they also take Nicole’s Thursday class. Obviously, she’s building up a bit of a following, and it was nice to see a mixture of serving members, retired soldiers and a true range of ages sprinkled throughout the class. Proof is in the pudding: Yoga unites all kinds. Sadly, so does trauma.

It seems that Yoga Warriors is about to explode across the country, with some major players paying serious attention to this amazing yoga phenomenon. But despite all the hype, and my own excitement to eventually become a YW instructor, the root of this unique practice is in the comradeship that is built. It is a room free of judgement or snide comments or fancy gear. And as I settled my spine into the mat, I realized that in several ways, I had returned home, to Barrie, to my space on the floor in the Bliss Studio, and to my military self.

This post isn’t particularly informative or helpful. Just a little note from one yogi’s experience for others to relate to. Ultimately, I suppose the lesson of the day is that yoga can be such an escape for all those who practice it, not just those who struggle with PTSD. Somehow, we are all united in our battle with stresses, pain, illness, family or financial woes. But when we lay them out on the mat, offering ourselves up to the peace that could come with a little meditation and a little forgiveness of ourselves, the possibilities are boundless.