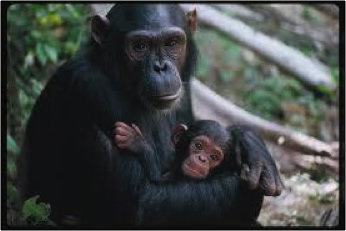 On many occasions, I’ve heard people observing the behavior of chimpanzees and other Great Apes say, “Wow, that’s kind of scary.” Invariably, they’re talking about the clear similarities between these animals and ourselves.

But why should our close kinship to our closest primate cousins inspire uneasiness, rather than wonder and amazement? The realization that our species is an inextricable part of the web of nature can be deeply comforting. This kinship doesn’t diminish our own uniqueness, any more than it does the uniqueness of chimpanzees, gorillas, or bonobos.

When I watch a chimpanzee fashioning a crude tool out of a stick and using it to extract a tasty snack of ants from a fallen log, I’m filled with amazement. I’m reminded that intelligence exists on a continuum from the simplest multicellular organisms to Homo sapiens. Even outside the realm of the primates, signs of intelligence and personality in the animal kingdom abound. Anyone who has kept more than one dog or cat can testify to each animal’s unique personality! In varying degrees, all mammalian mothers care for and nurture their offspring. All animals experience fear, and many demonstrate rich and varied emotional lives. This can be seen in domestic animals of all kinds, which apparently feel everything from instinctual fear to what we would call jealousy, anger and love. Even in the wild, we see example after example: the wolf’s fierce devotion to the pack, dolphins’ highly complex social behavior, and nearly every animal’s solidarity with others of its kind.

So why the “scary” when observing primate behavior?

I think it’s a bit of leftover angst about the loss of our “special” status. Before the advent of the scientific method, everyone “knew” that we were the center of the universe. To paraphrase the Greek philosopher Protagoras, humanity was “the measure of all things.” This solipsism is hardly surprising; it’s precisely what one would expect in a species that had only recently made the transition from sentience to self-awareness (and in evolutionary terms, we made that leap less than a moment ago). With each great scientific discovery, however, our status was further diminished. Galileo proved that the earth revolved around the sun, divesting our planet of its centrality in the solar system. Leeuwenhoek and others upset our Dominionist apple cart by discovering previously unknown microbes; gradually it became clear that it was they that had dominion over us. Finally, Darwin’s theory of evolution by means of natural selection dealt a fatal blow to the belief that human beings were placed here by a special act of creation. No wonder we felt ill at ease, and that some of this uneasiness persists!

Nonetheless, once you’ve embraced your identity as a member of one mammalian primate species among many, a most wonderful sense of universal connectedness follows. The Buddhist concept of the oneness of all living things is confirmed by scientific experimentation; one can truly begin to see the universe in a single atom! This is thrilling, liberating, but it also contains the seeds of disturbance. Suddenly we find ourselves painfully aware of the damage we’re capable of: we have the power to wipe out other species — along with our own — and to make the biosphere uninhabitable.

Fortunately, the converse is also true. An awakening to our place in nature’s web empowers us to protect the environment, preserve endangered species, and improve the lives of our fellow human beings. We can consciously choose to replace our old tribal allegiances with a new, global ethos. These new competencies more than compensate for any remaining uneasiness we may feel due to our loss of status. We are now free to observe our primate relatives acting in many of the same ways we do without any anxiety or uneasiness. In their place, we can embrace a sense of joy and wonder at the vast, interconnected web of nature — and our unique part therein.