You are here: Home / Lifestyle / Samhain Approaches! The Precursor to Halloween 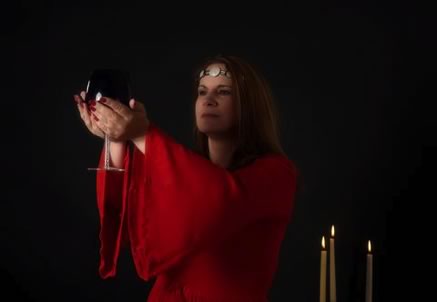 What are the roots of Halloween? How did the celebration get started?

It all began with the pagan celebration of Samhain, a word meaning “Summer’s end” in the Brythonic branch of Gaelic. The pagans of the British Isles saw the date as the official end of summer, and one of several “thin times” of the year. By “thin,” they meant that the veil between the world of the living and that of the dead was more porous than usual; spirits could easily pass through the veil and interact with the living. This, and the fact that some in these agrarian communities might or might not survive the winter (depending on how successful the harvest had been) accounted for the death-related themes of the holiday. This obviously continued in the Halloween (All Hallow’s Eve) holiday that Samhain preceded.

When the tribe gathered around the bonfire on Samhain night, the flames would attract bats. With the fire being the only source of light, they resembled capering spirits, reinforcing the belief that the spirits of the recently dead were crossing over into the realm of the living. While the pagans worshiped gods and goddesses, there were still strong remnants of ancestor worship among them. They believed that the spirits of family and friends had to be appeased to ensure good fortune– something that could easily be a matter of life and death. This is where the practice of going from house to house and asking for treats came from: children (and not a few adults) would offer to make sacrifices to the gods and the recently dead on behalf of each household they visited in exchange for treats.

When Emperor Constantine made Christianity the official religion of the Roman Empire (outlawing pagan practices in the process), the Church appropriated Samhain and turned it into All Hallow’s Eve, a Holy Day of Obligation when Christians were to appeal to the saints for the quick release of their deceased loved ones from purgatory. The house-to-house begging that would eventually become known as trick-or-treating took on this new aspect: the children at the door promised to pray for the release of the household’s recently dead from purgatory in exchange for “soul cakes.”

The death-related themes have persisted into modern celebrations of Halloween. It is the one day of the year when we are allowed to mock death and make it entertaining. If you were to put up the traditional funereal Halloween decorations outside the house any other time of year, you would run a real risk of being arrested!