You are here: Home / Book & DVD Reviews / Teachings of Yoga 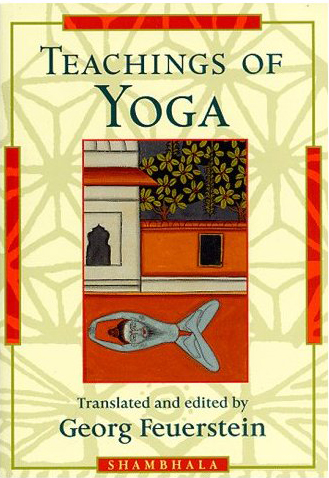 Hello again! Before we dive into the untold wisdom of this book I found hiding in the dusty shadows on a shelf at my local library, I have a small confession to make: As I write this, I am eating a reasonable amount of chocolate covered almonds…and some leftover Christmas candy from work that only cost me twenty five cents for a one pound bag. Funny (or sad, I haven’t quite decided which yet) that I can buy a pound of pure sugary, gummy nothingness for almost as little, but a pound of bananas is three times as expensive! As for the candy, my own guilt will demand five miles out in the hills tonight in an attempt to compensate.

Gummy wisdom
Where was I? The library! Our town library has apparently won approval and funds to build a new modern structure sometime in 2011, but in the mean time the old library (reputed to be haunted) serves very well. Selection can be scarce, but the old shelves of reek paper dust and the ink of billions of words as if they had become a permanent part of the shelf itself. Hard, balled-up pieces of chewing gum can still be found under some of the tables, and thanks to that thirty year old piece of what appeared to be Hubba-Bubba gum – I found Teachings of Yoga

Right now you are asking how I knew the gum is thirty years old, and you are right – nothing is for certain. As an avid bubble gum fanatic (especially grape Hubba-Bubba) in the seventies and first year or two of the eighties I consider myself an informed opinion, and given the level of petrifaction of the gum in question…Anyhow, I banged my knee on it under the table, bent down to see what it was, saw the gum first, then the book sitting in a dark corner on the bottom of a shelf in the children’s section. I took a second or two to admire the multi-colored constellations of gum in a variety of flavours stuck elsewhere on the table bottom, happy that the gum’s original owners were reading at the time and not sitting at home staring at the television, and then retrieved Teachings of Yoga from its hiding place.

is not a book by any one man, but a collection of thousands of year’s old wisdom gathered and translated into English to benefit the Western world. Georg Feuerstein has done a wonderful job in not only translating this Yogic wisdom, but artfully and mindfully choosing which treasures to include. The contents pages at the front of the book read like a self-help diagnosis and prevention/treatment guide – proof that as a species we may have moved ahead technologically, but we are still assailed by the same issues that man and womankind faced thousands of years ago. Such subjects as overcoming depression, impulse control, truthfulness, humility, non-violence – to name only a few – are answered or explained with guidance to overcome these issues through the path of Yoga as a holistic and all inclusive lifestyle. The wisdom of men and women thousands of years in our past speaks with equal power today as it did then because of the truth their words contain and the harmony of existence their lives represent.

starts with words that are powerful in their simplicity and clearly state the author/editor’s position on the subject of Yoga:

We as humans are by nature both Self (or Spirit) and self (or ego-bound personality). To the degree that we may transcend this duality by conquering the self, we become more aware and present in our true form of Self. Teachings of Yoga is designed to help accomplish this task (or at least give you the tools to begin) and does so by laying out the life of a Yogi or Yogini and providing the tools to overcome the obstacles so many others have found along the path.

Wacky Wisdom
The wisdom contained within Teachings of Yoga is simplicity itself; shrouded from the callous eye by riddle and contextual allegory, or what the Taoist refers to as “crazy wisdom.” Rather than be confused or frustrated by the writing style, the reader has the opportunity to think deeply about the text and ‘feel’ his or her way to the truth within. This allows the wisdom of Teachings of Yoga to transcend our intellect and resonate at a deeper level inside of us. An example will make this clearer:

One of my favourite texts within Teachings of Yoga is by Swami Sivananda. The passage is called “Commune with Nature” and speaks to the wondrous classroom that nature is and that I have come to call my own home too. As of late, I would add to this text; “Wander the snow-covered hills after dark with your coyote companions. Join them in their howlful play – for another voice is never begrudged.”

Commune with Nature
Smile with the flower and the green grass. Play with the butterflies, the birds, and deer. Shake hands with shrubs, ferns and twigs of trees. Talk to the rainbow, wind, stars, and the sun. Converse with the running brooks and the waves of the sea. Speak with the walking-stick. Develop friendship with all your neighbours, dogs, cats, cows, human beings, trees, flowers… Then you will have a wide, perfect, rich, full life. You will realise oneness or unity of life. This can be hardly described in words. You will have to feel this for yourself.

Or a second, less obvious poem by Kabir in Teachings of Yoga on the subject of pride:

Kabir, be not proud of your body-
A sheet of skin stuffed with bones;
They who rode stately horses
Under canopies of gold
Now lie wrapped in earth.

Kabir, be not proud
Of your lofty mansions:
Today or tomorrow
The earth will be your bed
And grass will cover your head

Kabir, be not proud
Nor sneer at the forlorn;
Your canoe is still in the sea,
Who knows what its fate will be?

Kabir, be not proud
Of your beauty and youth;
This day or the next
You will have to leave it,
Like a serpent its slough.

I freely admit that Teachings of Yoga

is far from being a new release, as it was way back in 1997 that this miniature treasure trove of Yogic wisdom was first brought to type. Then again, the information contained within its cardboard and paper walls spans millennia as it is – and yes, Amazon still has new copies of this book! I give Teachings of Yoga

. Until next week, may your search for your Self lead you right to where you are.