You are here: Home / Wellness / The Healing Presence, Part Three (For Humans and Other Animals) 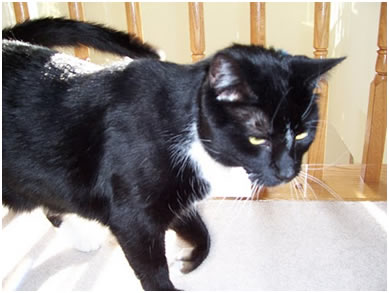 I took one of my cats to the vet yesterday. I would frankly be shocked were I ever to find a healing professional as thoroughly kind and caring as she for my wife and myself.

This extraordinary physician carries herself with quiet dignity, grace, and great compassion. It is clear that her presence in the world of the healing arts is what might be genuinely called a calling, a true vocation. Pepe Miguel, the cat in question, is a nervous individual who has difficulty having strangers in the house or leaving the house in the carrier; in fact, he has often managed to evade me entirely. Several times I have had to call the vet to explain that he simply could not be found. How is it that this animal can be so well-attuned to my mental and emotional state that he is able to intuit that I’ve come looking for him to take him to the vet? His carrier “lives” in the same room where he spends most of his time (my office, on a heated bed), so it’s not as if he is reacting to the sudden appearance of the dread object. He’s reacting to something undefined in my manner and carriage when I come looking for him. Amazing. The one and only time he growled at me was long before I’d made a habit of keeping the carrier in his room, and he heard/smelled/sensed me coming with it. He hid in the closet under clothes, which I’m sure he assumed was a thoroughly safe hiding place. I happened to find him, but only after exhausting every other possibility. He was not a happy cat that day.

This time, as always, he wailed the entire time we drove to the vet’s office. I petted him through the carrier and made comforting noises the whole time. He is definitely never happy about going to the vet, despite my best efforts to assuage his anxiety.

But once the doctor entered the office and I opened the carrier, things began to change. At first, of course, he came out with all the cooperation with which he went in—that is to say, he hugged the carrier with all four paws and resisted with all his strength. But once I’d managed to get him on the table, his doctor began talking soothingly to him, petting him as much as I did. (Pepe lives to be petted and brushed.) She told him how beautiful he was, speaking in calm and quiet tones that nearly hypnotized my feline companion. She had little difficulty examining him; with my help, she even managed to give him the inoculation he needed without incident.

All this led me to think about the healing presence as it applies to all sentient beings: humans and other animals. This woman definitely has it, and that’s why I have no intention of changing veterinarians while Pepe Miguel and his sister Polly Rae are living. Pepe was pronounced to be in excellent health for a geriatric cat, and I was both delighted and saddened at the observation. The two siblings and litter mates turn 15 this year, and I realize I have to adjust to the idea that they will soon come to the end of their life span. My wife and I will grieve deeply when they go; I know this from experience, because we’ve already kept two other cats—animals that were just as much family members as these two—and we had to deal with their passing. I take comfort in the fact that they are not saddled with consciousness of their own mortality. (They have a decided advantage over us humans in this regard!) We love them deeply. While they live, I am so very delighted to have found a doctor of veterinary medicine who exhibits the “healing presence” so admirably as to put my babies at ease when they have to face the inevitably stressful experience of going to the vet’s office.