You are here: Home / Philosophy / Yoga: A Historical Perspective – Part 2 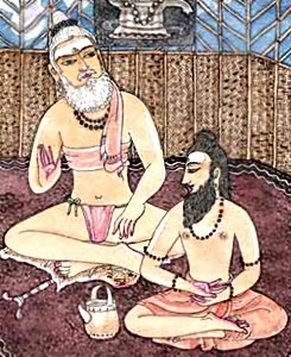 “Classical Yoga” is the term given to the yoga school derived largely from Patanjali’s Yoga-Sûtra. This text, written in Sanskrit in about the second century of the Common Era, is essentially a collection of spiritual sayings. The word “sutra” (which translates as “thread”) is essentially analogous to what those in the Abrahamic tradition would call a “verse” of scripture. Patanjali was a rishi of great reknown; his disciples used the Yoga-Sûtra as a means of inculcating his wisdom for themselves. In the fifth century, his latter-day disciple Vyâsa composed his well-known Speech on the Yoga-Sûtra, in which he attempts to interpret the master’s statements.

Primary among the Patanjali/Vyâsa concepts is that of the separation of matter and spirit. Unlike today’s emphasis on holism, this was a system for separating spirit from matter and allowing spirit to be ascendant and pure. This distinguishes Patanjali yoga from other Indian philosophical systems, which were primarily devoted to various forms of nondualism.

Postclassical Yoga is the term used to delineate yoga schools that emerged in the post-Patanjali era and went in different philosophical directions than his Yoga-Sûtra. In these schools, we see the emergence of yogic thought much closer in nature to what we would consider its contemporary counterpart. Unlike the separation of matter and spirit that typified the Patanjali school, postclassical yoga asserts their synthesis: the “all is one” concept. It reached back ad fontes (“to the source”), drawing upon the Upanishads. Indeed, nonduality is the chief hallmark of postclassical yoga, the philosophical position which remains in ascendancy today.

The transcendent reality of all things being part of a singular whole dominated the postclassical era. It is in this period that we see the emergence to prominence of the âtman principle– the transcendent Self that conquers the limits of the ego-bound individual identity.

Toward the end of the postclassical era, yogis began to look more deeply into physical reality and the previously ignored potential of the physical body. Since body and spirit were one system, it made sense to see what the body could contribute to the spiritual quest. Hatha Yoga (the yoga of the body) began to come into its own. Instead of seeking a means to depart from physical reality through spiritual exercises, the idea of pursuing the realm of the physical for its own sake (and for what it could contribute to spirituality) began to gain currency. A system for bodily rejuvenation and physical longevity began to take form, one in which the body was elevated as much more than merely a clay pot that contained the spirit. The yoga that many yogis and yoginis pursue today owes much to this innovation; Tantra Yoga derives from this philosophical turn as well.