You are here: Home / Book & DVD Reviews / Enlightenment: Experience the Self, Now! 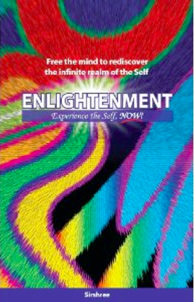 Isn’t it true that enlightenment cannot come to any individual until he or she has had many incarnations?

Doesn’t enlightenment require living as a hermit, concentrating on nothing but meditation and cultivating higher states of consciousness?

Isn’t enlightenment something only a very few, spiritual elites can attain?

According to Sirshree, the answers to these questions are “no,” “not necessarily,” and “definitely not!”

In his book Enlightenment: Experience the Self, Now!, Tejguru Sirshree Tejparkhiji (known to his devotees as Sirshree) boldly declares that anyone can attain enlightenment. Furthermore, there is no need to live as a hermit or a monk; neither must you wait for another incarnation. You can encounter the Self (the transcendent, idealized Self of which all other “selves” are a part) in this lifetime, through daily practice and devotion.

Many traditions have long held that compassion is the heart of enlightenment. Sirshree agrees; he asserts that once the ego is released through disciplined spiritual practice, compassion becomes second nature. This is because the seeker has ceased to cling to his/her own ego and “self” as something distinctly “other” and separate from other beings. Those who follow the Tej Gyan (“Bright Truth”) path begin to wish for happiness and the avoidance of suffering for others as naturally as they do for themselves.

an intensely practical, “nuts and bolts” approach to achieving enlightenment. It suggests practical meditation practices and habits of mind/body that are designed to lift the spiritual seeker out of the prison of his or her own ego. When that release is achieved, Sirshree assures us, everlasting bliss is the natural result. No longer will we be caught on the treadmill of satisfying desire after desire, yet never achieving satisfaction. Freed from the bonds of desire, we experience a transcendent sense of liberation; union with the divine Self is achieved, and no sense of estrangement remains.

Without denigrating the monastic experience or belief in reincarnation in any way, Sirshree makes a strong case for a fully egalitarian approach to enlightenment. This exalted state can be reached by anyone, he asserts, and in one’s present lifetime (hence the “now” in the book’s subtitle). While the monastic lifestyle has much to recommend it, it is less than practical for 21st century spiritual seekers; most of whom must make their own living in the world of commerce. While Indian spiritual tradition has a long history of making a clear separation between the “monk” and the “householder,” Sirshree sees this dualism as unnecessary and not entirely realistic. Using the methods outlined in Enlightenment, literally anyone can aspire to a fully enlightened state.

Sirshree has a large following worldwide; Enlightenment: Experience the Self, Now! will no doubt expand his base of global devotees. His organization, the Tej Gyan Foundation, has been reaching out to seekers of all nationalities and spiritual traditions for quite a while; it seems likely that Sirshree’s following will continue to grow on a global scale as it pursues its mission of worldwide enlightenment. This book will no doubt be responsible in large part for the expansion of his influence.