You are here: Home / Book & DVD Reviews / Mantras and Mudras 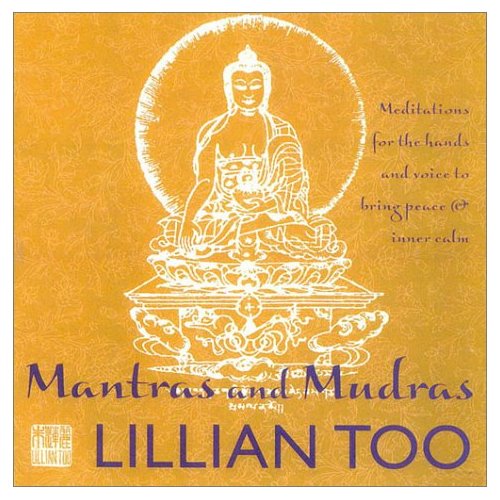 When we engage our body, speech, and mind with the motivation of achieving harmony with our own Divine Essence, we have created a ‘holy trinity’ of power within ourselves that allows us to achieve our goals with less effort.  Mantras and Mudras

offers mantras that act as wonderful aids to living a more reverent life; these mantras have incredible power to awaken us to the spiritual path, and when coupled with mudras representing the same wisdom, form a subtle ‘inner reverberation’ within our core, awakening this three-fold power within us.

Mantras and Mudras provides not only a selection of Mantras for every aspect of living, but also includes English translations for those who are not comfortable chanting them in their original language.  Although there is additional power inherent in chanting these mantras in their native tongue, it is the spirit in which you absorb them into your being that will determine their effect.  A story told by Rinpoche explains the truth of mantras beautifully:

A monk once visited a hermit who lived alone on an island doing retreat.  The hermit had given himself three years to complete chanting ten million of the powerful six-syllable mantra of the Compassionate Buddha.  The hermit had been told that attaining this level of practice would awaken his Yogic powers.  The mantra was OM MANI PADME HUM…

The monk listened as the hermit did his mantra and, with the best intention in the world, leaned over and whispered:  “I think you have the pronunciation wrong.  The mantra should be chanted this way…” and he proceeded to demonstrate.  The hermit listened attentively and then watched as the monk walked back to his boat to leave the island.  Ten minutes later, when the boat was halfway across to the other shore, the monk heard his name being called and, looking around, spied the hermit as the hermit called, “Listen to this, have I got it right now? The hermit proceeded to chant the same mantra, but with the monk’s intonation.  Astounded the monk realized the hermit was walking on the water next to the boat.  In that instant, the monk realized that the hermit’s faith and sincerity had given his mantra recitation far more power than he had realized.  Getting the intonation correct seemed almost irrelevant…

Buddhism is prominent throughout Mantras and Mudras, I’ll grant you.  In the book’s defense, if you look beyond the philosophy that Buddhism is and see to its core, it is truly your intent that will determine the results.  There is no difference in the truth of the spiritual life of a Taoist, a Catholic, or a follower of Islam. According to Mantras and Mudras, prostrations while repeating a mantra are a powerful prayer that crosses all belief systems and spiritual philosophies.  In example, reciting the Lord’s Prayer while kneeling at the altar, or performing daily prayers in Islam – both are forms of prostration and mantra recital.

To prostrate before an image or object that represents The Divinity within you is to surrender oneself symbolically at the feet of God.  It is a way of saying that we are nothing without the spirit that resides within us and all around us – a fundamental truth of our existence.  Prostrations teach us genuine humility and lead us to overcoming arrogance and pride.  Through our act of surrender, we open ourselves to the gifts of what is known in Buddhism as the “Guru-Triple-Gem.”  This three-fold strength unfolds in the following manner:

We take refuge in Buddha – again, substitute here as you need…The point of course, is to surrender to God or your own Personal Truth and realize the strength in that surrender.

We take refuge in the Dharma…Dharma in this usage is equated to Scripture.  When we are faced with problems or simply questions that arise in our own paths to The Divine, we have the gift of all of those who came before us – many who faced the same questions, and already found the answers.  To read the holy books of our beliefs or chant mantras aloud is to “speak Truth” and deepen our own connection to our image of The Divine.

We take refuge in Sangha…When the winds of life threaten to blow down even the most faithful, the third and final component of this powerful spiritual talisman is there to cushion us and provide assistance and guidance.  Sangha is nothing more, and everything that is – community.  Not one of us stands alone, no one ever has, and no one ever will.  Having faith in community is having faith in The Divine.

The use of Mudras or ‘hand-gestures’ dates back far beyond recorded history, and yet is still prominent even in modern culture.  To repeat this gesture while focusing on similar intent or being mindfully aware of its meaning is to harness the power of all of those over many generations who have used it as well.  Performing a mudra is a conscious action that has the unconscious effect of aligning ourselves with the mudras meaning in body and mind – thus facilitating our spiritual growth.  A mudra need not be necessarily spiritually based to have effect…

Of course, an easily recognizable mudra in modern culture that exemplified a way of live and attitude towards life is the “hang-ten” mudra.  As far as religious and spiritual mudras are concerned, the most obvious is “prayer hands,” hands facing palms inwards and pressed flat together.  This mudra is one of not only reverence, but “bringing together” the elements of the body, mind, and spirit and focusing them all towards the same means.

uses speech and body to guide us into a way of living a more reverent life.  The hidden secret that runs in the depths of the book is awesome in its simplicity:  Perform every action of life with reverence, awareness, and the realization that as a vessel of The Divine itself that you are indeed performing holy deeds.  When we give Life the reverence it is due, every task becomes an opportunity to serve our higher self and brings a level of joy and satisfaction beyond our expectations.

I used to hate house-keeping…you know; dusting, endless cleaning, vacuuming sweeping, washing…aargh!  Over time I learned to turn mundane chores into opportunities for mindfulness and reflection.  A powerful way to keep this at the forefront  of your mind is to see yourself purifying the space in which you do your Yoga practice (your home, classroom, etc…)  As you clean, think of anger, attachment, worry – anything that you see as a blockage in your life – all of them erased, disappearing as you physically renew your surroundings.  A powerful mantra found in Mantras and Mudras to recite while cleaning is “DURUPANG TIMAPANG.”  In essence, “this is to sweep away all negative thoughts and obstacles that block my true awakening.”

If ever there was a time in the history of humanity that reverence for life and all that it teaches us is a profound shortcut to The Divine, now is the time.  Our planet and her citizens are facing the winds of change, some of which may be difficult to understand or accept.  To find an aspect of God in all we do creates a positive environment from which our earthly viewpoints will begin to dissolve in the face of our own spiritual truths.  Mantras and Mudras reminds us of the ‘creative reverberations’ that mantras are:  Seed syllables from the beginning of time that ripple outward from the one who is chanting – a positive creative force that can alter matter itself.

In Yoga or meditation, we consciously perform many various mudras, often with only half-conscious awareness of their meanings.  Developing awareness of their meaning and consciously focusing on this while performing these mudras will enrich your practice as well as your own spiritual growth. (Reverence, respect and ‘bringing together the three holistic elements of mind, body, and spirit; the meaning of prayer hands, in example…)

Don’t be afraid to have some fun when it comes to life.  All of nature loves to fool around (just look at otters) and one way to worship The Divine and show reverence to Life is to play.  In my garden, I have one of my own mudras similar to the one followed by the phrase, “These are not the droids you are looking for…” in Star Wars…Except after I wave my hand I say, “These are not the plants you are looking for” to the robins who have taken to ripping the young juicy leaves directly off my vegetable plants.  Does it work?  I guess so.  I still never get mad at the birds, and they continue to treat me with playful, mocking indifference as they mow down my hapless plants in small but growing numbers.  All is as it should be, and I remain focused on the Divine Light within me…AUM MANI PADME HUM!